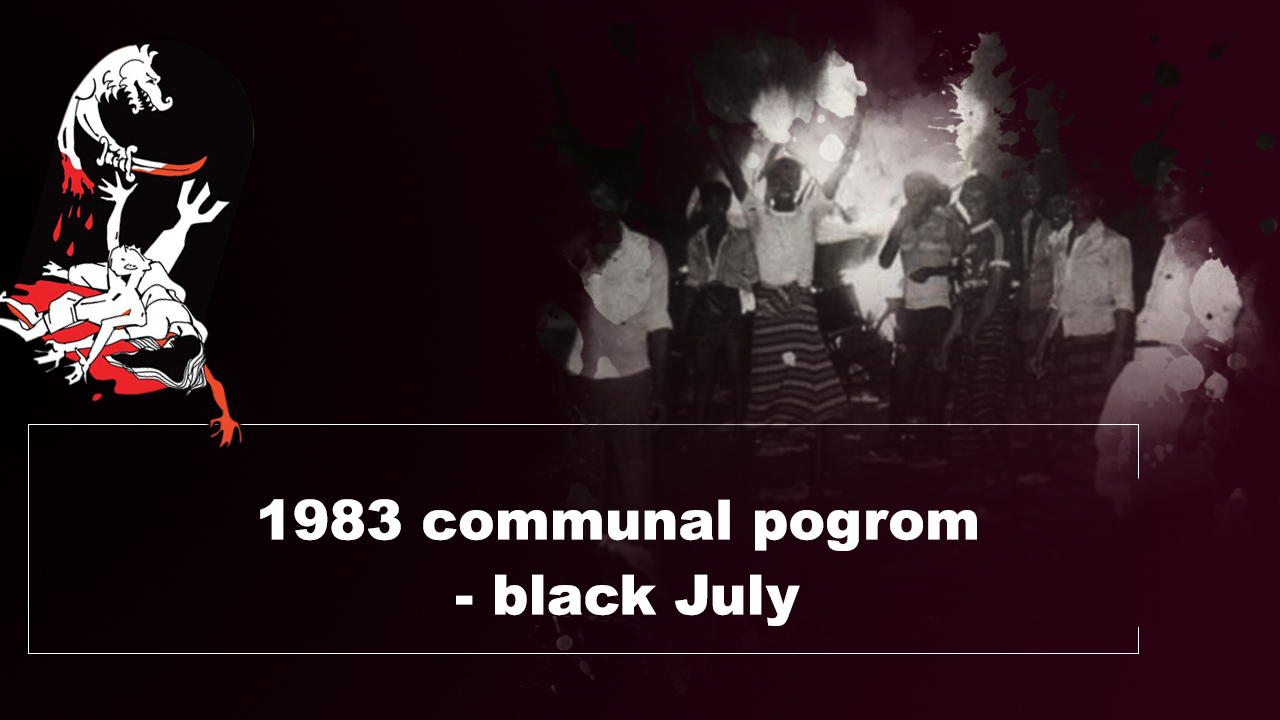 1983 communal pogrom
The precursors
Local government elections were held in the Northern district of that time in May 1983. This turned out to be a contest between the Tamil moderate party and the emerging Tamil nationalist sections which boycotted the elections. 98% of the voters boycotted. Following the elections the Sri Lankan military which by now has been sent in numbers to Jaffna burnt down shops in the Kandarmadam area and entered private homes and stole valuable properties. The troubles spread to Vavuniya and Tamil shops were burnt there as well.
The worst hit was Trincomalee where during the month of June 1983, every day a village was attacked and at least one civilian was murdered by the military and Sinhala thugs supported by the military
On 01.07.1983, many Tamil Nationalist organizations called a protest against the massacres in Trincomalee. A train from Colombo was burnt by Tamil militant youths. Two senior protest leaders, Dr Tharmalingam and Kovai Maheson, were arrested and taken to Colombo. Two press offices in Jaffna that of the Suthanthiran and Saturday Review publications were sealed off by the military. 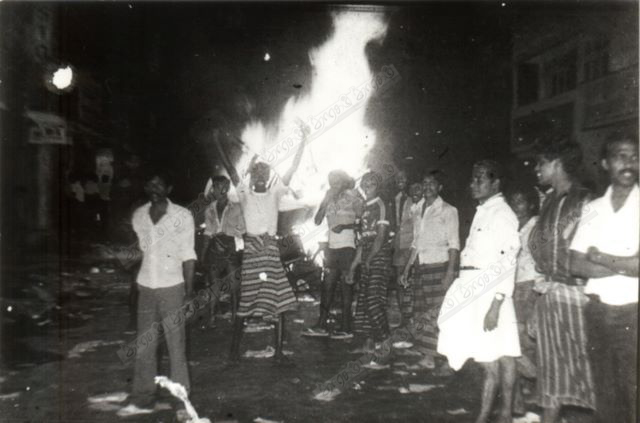 Using the claymore attack on 23.07.1983 in Thirunelveli that killed 13 Sri Lankan soldiers, as a pretext, an island wide pogrom against Tamils was let loose organized by the government ministers.
In Colombo
On Sunday 24th of July 1983 several persons boarded public and private buses in Colombo and began to make racist remarks designed to whip up animosity towards the Tamil community. Some shops belonging to Tamil traders were burnt and some people beaten and killed. Troubles spread quickly. By Monday morning the attacks has spread to several outlying areas of Colombo. Violence continued with increased intensity throughout
Monday. Vehicles driving on the road were stopped. If the occupants were Tamil they were beaten and sometimes killed. Thugs with electoral lists in their hands went from house to house, killing Tamils and burning property owned by Tamils. The electoral lists helped them to identify Tamil houses. Some Sinhalese people at great risk to their own safety hid Tamil friends in their houses. 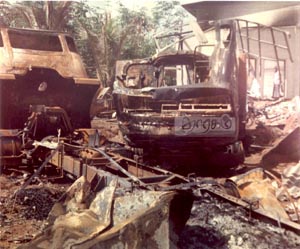 Several eye witnesses including tourists have reported that the security personnel looked on as the violence was perpetrated. There are reports that the Army even threatened Police not to harass the rioters. On Monday 25th of July at 4.00 p.m. the government imposed curfew and this stayed in force throughout Tuesday the 26th. It was again imposed on 27th from 4.00 p.m. to 5.00 a.m. In spite of the curfew attacks on Tamil people continued throughout this period.
Rest of the island
The communal violence against Tamils was not restricted to Colombo. Thugs roamed the city of Kandy looking for Tamils on the streets and in the buses. In Trincomalee on 26th of July, 200 houses of Tamils were burned. Violence in Trincomalee town has been continuing for over a month by the time the violence broke out in Colombo on the 23rd of July. The Trincomalee town has a Sri Lankan naval base. The violence against Tamils here was assisted by Sri Lankan Navy as well as the Army and the Police. In Jaffna on the 23rd of July, the Army went on a rampage shooting, on the road, in the houses and in buses killing a total of 50 civilians.
Welikade prison massacre
On 25th July Sinhala prisoners attacked and murdered 35 Tamil detainees in a section of the Welikade prison in Colombo. Another 28 Tamil detainees in a different section was immediately transferred to the Youth Ward. On the 27th armed Sinhala prisoners scaled the walls and appeared in front of the Youth Ward. Dr. Rajasundaram respected for his tireless work among the downtrodden sections of the Tamil community was one of the detainees in the Youth ward. He came forward and pleaded with the attackers to spare them. Door suddenly opened and Dr Rajasundaram was dragged out and beaten to death. The rest of the detainees broke the chairs and tables and used it to keep the attackers at bay.
ICJ report
International Commission of Jurists issued a report on the pogrom. It was written by Paul Sieghart. This report suggests that the riots of July 1983 began even before the reports of the killing of 13 Sri Lankan soldiers in a claymore attack in Jaffna appeared in the local newspapers.
Only on the fifth day, on 28th July the President of Sri Lanka appeared on television. In a brief address he blamed the violence and destruction exclusively on the reaction of “the Sinhala people” to the movement for the establishment of a separate Tamil state, and announced the Cabinet decision to bring in what in the event became the Sixth Amendment to the country’s constitution. 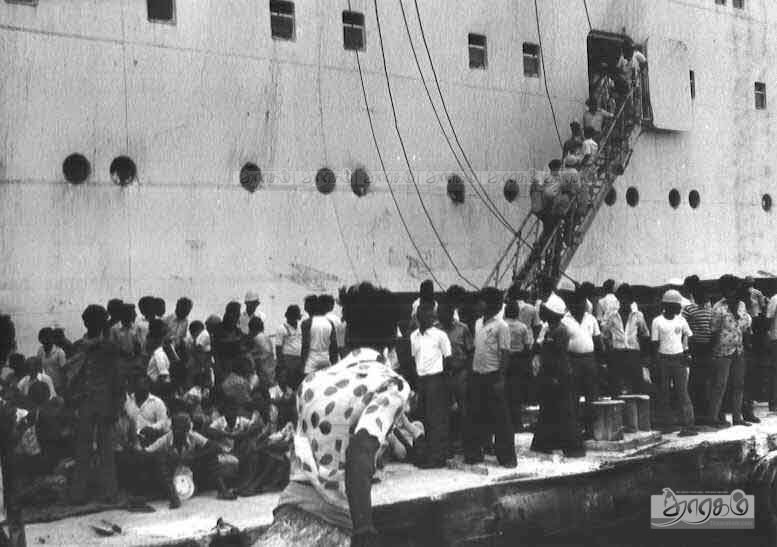 Following is from Paul Sieghart’s report,
“In his address to the nation on the 5th day of rioting president did not see it fit to utter one single word of sympathy for the victims of the violence and destruction which he lamented. If his concern was to re-establish communal harmony in the Island whose national unity he was anxious to preserve by law that was a misjudgement of monumental proportions…
But what I find most extraordinary is that, to this day, there has been no attempt to find out the truth through an official, public and impartial enquiry, when the situation in the country cries out for nothing less.”
Casualty figures
Due to the absence of any public inquiry following the riots the actual number of deaths and the cost of damage to property were never established. 200,000 Tamils were immediately rendered refugees. Tamil organizations that have carried out their own survey estimate that nearly 3000 Tamils were killed. All non government reports on the riots came to the conclusion that the violence was deliberately started by the government and was carried out through the use of thugs, controlled and organized by members of the governing United National Party.
References:
• Sri Lanka: A Mounting Tragedy of Error by Paul Sieghart. Report of a mission to Sri Lanka in January 1984 on behalf of the International Commission of Jurists and its British section Justice, March 1984.
• Detention, Torture and Murder – Sri Lanka by S A David (Survivor of the Prison Massacre).
• Sri Lanka Hired Thugs by Amrit Wilson in New Statesman, 26 July 1983.
• Race \& Class Vol 26 No 4 1985 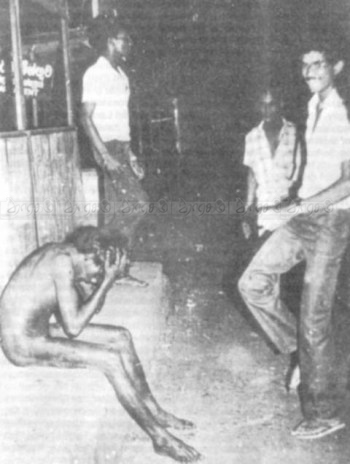 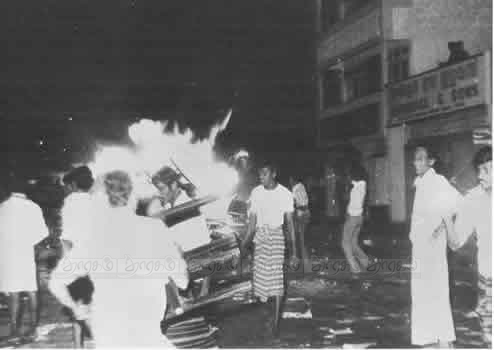