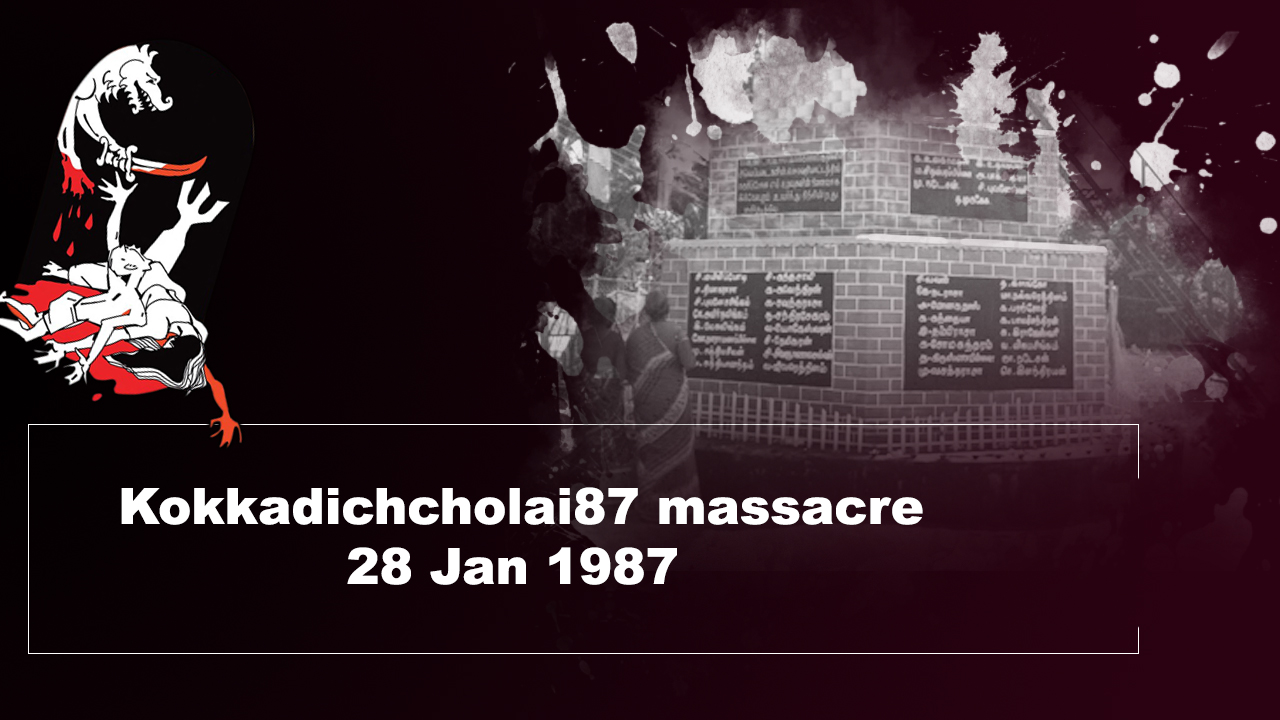 Kokkadichcholai is situated in the Batticaloa district. Farming, fishing and prawn farming were the main occupations of the people.
On 29.01.1987, Sri Lankan military began its attack on the village and continued it for three days. The military entered the village from Kondavedduvan, Kaluvanchikudi, Vellaveli, and Kallady camps in military trucks and helicopters. They took people aged from 14 to 40 and killed more than 200 of them.
A prawn farm was operated with aid from United States of America in Mahiladiththivu. It was employing a large number of workers. 135 workers in this prawn farm were among those killed on 28.01.1987. The military shot dead 24 people who took refuge in the Kokkadichcholai rice mill. Seven of those killed were aged 12 years old.
Sellathurai Ravinathan was a watchman at the Prawn Farm. On the day of the massacre, Ravinathan was on the day shift. His account of the incident is as follows:
“I left for work early in the morning. Unlike normal, that morning there were 2 or 3 helicopters circling in the air. I knew something was going to happen. I ran to the Prawn Farm, together with many other men. We all believed that because the Prawn Farm was owned by Westerners, we would be safe there. We had been caught and questioned twice before by the Army but we were allowed to go. We therefore ran there hoping it would give some protection.
At the junction, there was a large military vehicle. Army started jumping off and running onto the road. This was the first time we knew what the STF looked like. All the SLA that were on the road, were pointing their guns towards the Prawn Farm. One man stood up, pointed his gun and came towards us. The two or three people that were with us saw this and bent down and slowly went the other way through the water. Ambikaipatham said, “Don’t run. If you do they will shoot everyone”. We softly whispered and told them to come back. They came back. 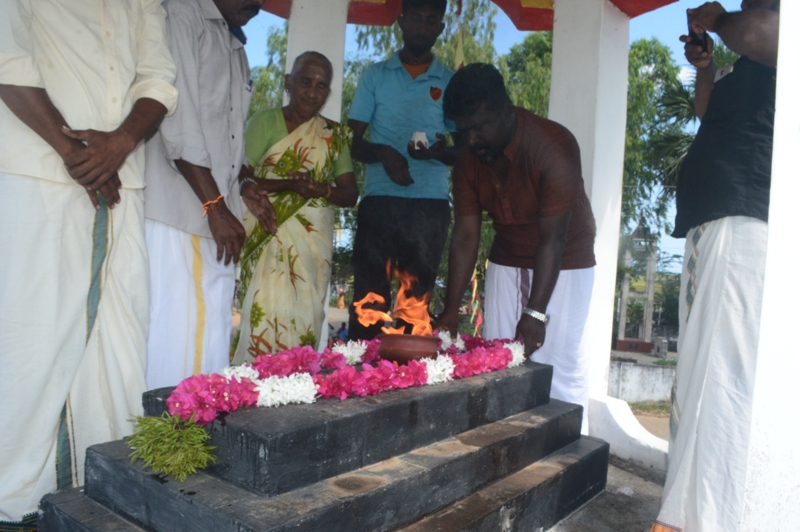 People from Muthalaikuda, Munaikadu, Mahiladiththivu, and Ambalanthurai were all caught up in here. Narayanapillai was returning from the fields and ran into the Prawn Farm. The first bullet was aimed at him and it hit him. Three army personnel came to the place where we were. They shouted and told us all to gather in one place. Whilst everyone was trembling with fear, they fired their gun once. Everyone ran away from that spot. I took cover behind the little huts that were in the Prawn Farm. A young boy called Theivanayagam ran before us. We heard sudden gun fire. We don’t know what happened to him. I immediately took protection in the small river. A young boy called Nesathurai did the same in front of me. In the meantime, the Army turned the vehicle towards the direction people had run and started fire. They shot the little children who were in the Prawn Farm looking after the little birds. These poor children would come very early in the morning to make sure that no birds attacked the prawns that were being farmed. They hoped that they would get something – however little – in return for this. How could they shoot such poor little children?
I removed the clothes that I was wearing and ran through the small Kanna Forest. As I was running, I heard gun fire. After a little while, I heard no noise from the direction of the Prawn Farm. I thought that I should return and have a look at what had happened. As I was about to do this, an old man stopped me and said, “Brother, please don’t go back they have shot every one”.
My elder brother, who witnessed this massacre, lost his mind for three or four days.”
Available names of victims (name, occupation, age)
1. V.Vijayasingham
2. V.Yogeswaran
3. V.Muththuthamby
4. V.Kulanthaivel
5. V.Jeevaratnam
6. S.Lavan
7. S.Veelapoodi
8. S.Yoganathan
9. S.Mahendramoorthy
10. S.Mayiluppoodi
11. S.Mylvaganam
12. S.Thillainayakam
13. S.Puvaneswary
14. S.Eagamparam
15. S.Sivanesarasa
16. S.Suthakaran
17. S.Chanthosam
18. S.Mageswaran