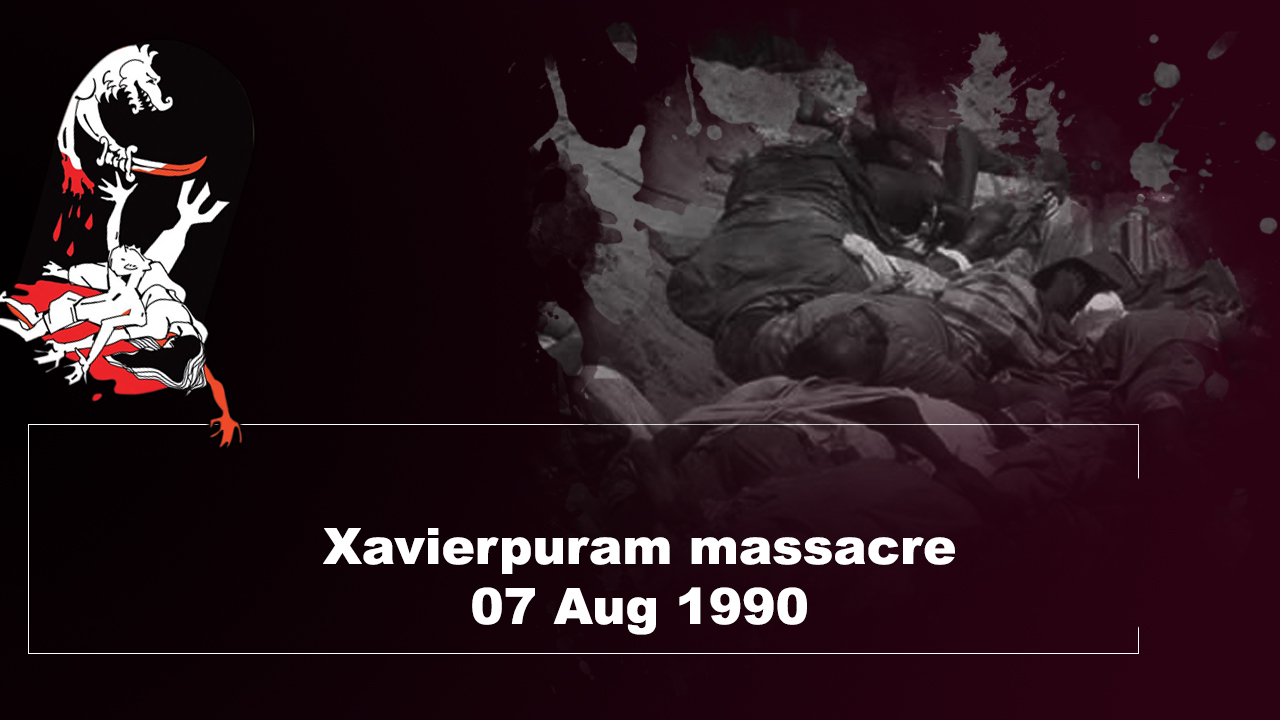 Xavierpuram, Amparai is the name of the settlement where the ‘Kurawar’ tribe lived from 1950.
On the 7th of August 1990 the community of Kurawar were attacked, their homes burnt and their youths shot dead. Men and women were tortured and

the church, school and community hall were burnt. There was no provocation for such an attack on the Kurawar. Later the attackers were identified as Muslim home guards. They carried out the attacks following an allegation that the LTTE had established contact with the Kurawar. In her sworn statement, Miniakkah describes the attack on Xavierpuram in the following manner:
“It was about 11o’clock in the forenoon of 7th August 1990, when some people were having their first meal for the day while others were preparing it when the attackers arrived. Along Neethai Road 18 tractors came one behind the other, carrying a large number people armed with guns, knives, sticks, clubs and axes. They stopped at the centre of the village, and called out the people – men, women and children- to assemble before them. The attackers, carrying guns, were in military fatigues. Their appearance foreboded evil.
The people of Xavierpuram became excited. The men, who were eating stopped eating, washed their hands and rushed to the place where men with guns stood. Together with my husband and two children, my son and daughter, I went to the place where we were asked to assemble. We were able to identify the men in uniform as home guards (Muslims) and the others from the Akkaraipattu area who had accompanied the home guards.
An eyewitness said:
“While we stood before the Muslim home guards and the hooligans who accompanied them, they (home guards) seized my only son and began torturing him. Another seized Jayaraja who was also a youth from my community and continued torturing both.
My husband could not bear to see his only son being brutally tortured. He sprang up and protested and I too raised cries. Thereupon, one of them armed with wooden pestle dealt a blow on the chest of my husband he fell down unconscious; he fell down like an uprooted tree. I rushed to my husband and lifted his head. Another person struck me on my head with a weapon. I remember blood gushing from my head before I fell unconscious.
Those who survived the attack fled to Thirukovil carrying the injured. They carried nothing with them and ran with the clothes on their back. Some of them had had no meal from the previous day.

Later when I opened my eyes, I found myself on a hospital bed, along with several others from my village. It was late in the afternoon, around 4 p.m. I tried to recollect what had happened but could not. Anxious relatives came to see me and I asked for my family members. I was told that a number of people were killed by the home guards and the Muslims and our houses were set on fire with petrol and kerosene. All the people had fled from the village, but some were preparing to go back to Xavierpuram to perform the last rites for the dead whose mortal remains were lying scattered.
Something urged me to return with the crowd to Xavierpuram. Despite my weak condition, I left the hospital ward, traced my husband who was equally in pain, and together with about 20 men, travelled in a tractor belonging to one member of our tribe. I was petrified when I saw my son’s body lying near the channel with bullet wounds. There were two other bodies beside his strewn around.
The eerie calm of the destroyed village with the burnt houses sent terror through me. The charred remains of the houses reminded me of ghosts. We made a quick return to Thirukovil.”
Massana, another victim of the attack is an ageing woman of the Kurawar tribe living in Xavierpuram. A grandmother, she said that she knew most of the attackers. Some of them were paddy cultivators in the area around where she lived. They not only killed, maimed and injured people, but also destroyed the church, the school and homes of a peaceful community, many of whose members worked on the paddy fields of the Muslims.
After homes were lost, and lives brutally taken, some survivors could not bear to live with what they had seen or with what they had lost and later committed suicide.