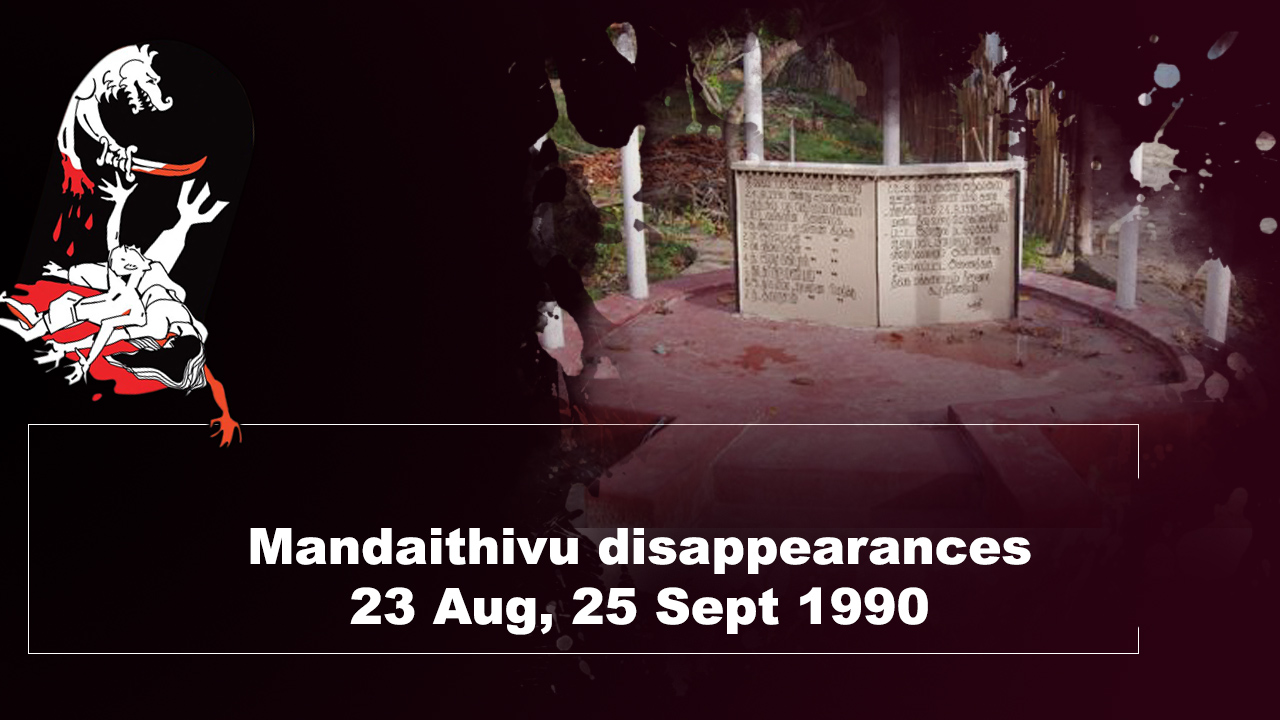 The three villages,Mandaithivu, Allaipiddyand Mankumban (M-A-M),are situated just across the
Dutch Fort in Jaffna. Fromhere the Sri Lankanmilitary launched its
operations. The majority ofthe people in the M-A-Mvillages were farmers,
fishermen and toddytappers. Prior to 1990 it
was economically prosperous. On 23.08.1990, the Sri Lankan militarydropped notices from air ordering people not to stay in their homes and togo to churches and temples. People were thus taking refuge in temples,
churches and schools. The military entered the villages on 23.08.1990 and
killed everyone who did not go to the temples, churches and schools. 20
people were brutally killed in
this manner.

On 23th August 1990 close to500 young men between theages of 15 and 45 were taken
away from the PhilipNeri’schurch in Allaipiddy.Hundreds of families hadtaken refuge in churches,temples and mosques after

instruction from the military. This is the imagery created by the narratives of the families: The entire village took refuge in the church. The army came and rounded up hundreds of able-bodied men and took them away, tied together. The woman screamed and ran behind, begging the army to leave them. The Army threatened the woman with guns, shot over their heads and physically beat them back. Meanwhile, the army instructed the children to recite, “We don’t want Tamil Eelam”.
Most of the men were later released little by little over a period of 10 days or so. Again the army arrived early in the morning on 23rd August 1990 to a school and a Pillaiyar temple in Mankumban where the people were told to go. People were still asleep. The armed men hit the sleeping young men on the head and ordered them to get up. Sisters gave their babies to their brothers to hold in the hope that it will save their brothers. The story repeats.
Less than two months after this second round up the entire military camp disappeared from the villages together with around 70 young men. What exactly happened to these men is still not known to this day.
All the families speak of the presence of Douglas Devananda, the leader of the militant EPDP group that has now become a political party, and the late army commander Denzil Kobbekaduwa at the site. Families also speak of the assurance given by Douglas Devananda to the families that their children will be safe. The Jesuratnam family who are looking for three of their sons have the most detailed story to tell about the role of Douglas Devananda in this disappearance: They met Douglas Devananda in the first week of June 1991. He got the particulars and then told them that he will go to Anuradhapura and will inform the family. The family went to Anuradhapura about ten times between 1991 and 1992 to meet Denzil Kobbekaduwa and succeeded in meeting him five times. When the family contacted Denzil Kobbekaduwa on 17th June 1991, he asked the family whether they have contacted Douglas Devananda about their children. Again on 13th May 1992 Kobbekaduwa told them that he would visit the M-A-M villages and after that he will show the children to the family. They met Douglas again on 25th June 1992 when he assured them that he would speak to the family after a visit to the M-A-M villages.
The family was called by the 1995 Presidential Commission of Inquiry. Theirs is the only family from the M-A-M villages that managed to attend the inquiry. This is because they were in Colombo and managed to get a date in Colombo. All the other families were displaced to Vanni during the period of the inquiry and were not contactable due to the communication and transport difficulties under the war situation. This family’s inquiry was held on 12th June 1996. At the inquiry the three commissioners instructed the family to ask Douglas Devananda about their children. They also

promised to inquire from Douglas Devananda and inform the family but the family did not hear anything from the Commissioners after that.
A total of 92 people were either killed or disappeared on these two dates. The bodies of some of them are suspected to be in the covered wells in Mandaithivu to which civilians cannot enter. Locals suspect the actual toll on these days is much higher.
Below are some excerpts about the role of Douglas Devananda in this affair from what other families have said:
Ratman Jeyaseelan’s brother-in-law says: “My mother-in-law (Ratman’s mother) and I went and spoke to Douglas Devananda. We asked him to release Rattu since he is a boy who does not have a father. Douglas said “He is a good child and we will not do anything to him. We are keeping him only to transport water”. … Rattu’s van is sandalwood colour. After that whenever I see the van at a distance I run towards it. When I go there Douglas Devananda will be there. They will be transporting water. When Rattu’s mother is there she will beg for Rattu’s release. Douglas will say ‘Amma why do I need your boy. I will keep him until we capture the Fort and then I will release him.”
S Jeyakumar‘s sister Vimaladevi says: “Douglas came. We begged and cried to him. He told us ‘Amma your boys are not with the army. We are keeping them. We will let them go soon’. His men then gave rice and other dry rations to us at the junction. We told them that we do not want anything and to just give us our children back. To this he consoled us by saying, ‘Amma did I not say that they are with me. Why are you still asking? I will relax when I give them back to you. I will give them before the 24th of next month’. We were confident that our boys would be released. So we took the rations and went back. This happened 2 or three times. … Army was in the Fort. We heard that when that army came they killed all our boys. Once we asked Douglas at the junction about this and he said, ‘Amma I took the responsibility. They will not do anything to them. Do not worry.”
Reetamma, mother of S Selvanayagam shares her account of what happened the day her son was taken away:
“Selvanayagam was 25 years old when he was taken away. He was fishing for his livelihood. They took my son-in-law as well and he was released the next day. He said that he saw Selvanayagam at the Aluminium factory drinking water next day I went with the other parents to see the army. My husband is sickly, therefore I went everywhere to search and complain. Douglas Devananda was at the Aluminum factory. We pleaded, begged and screamed to let our children go. They said they are keeping our children in