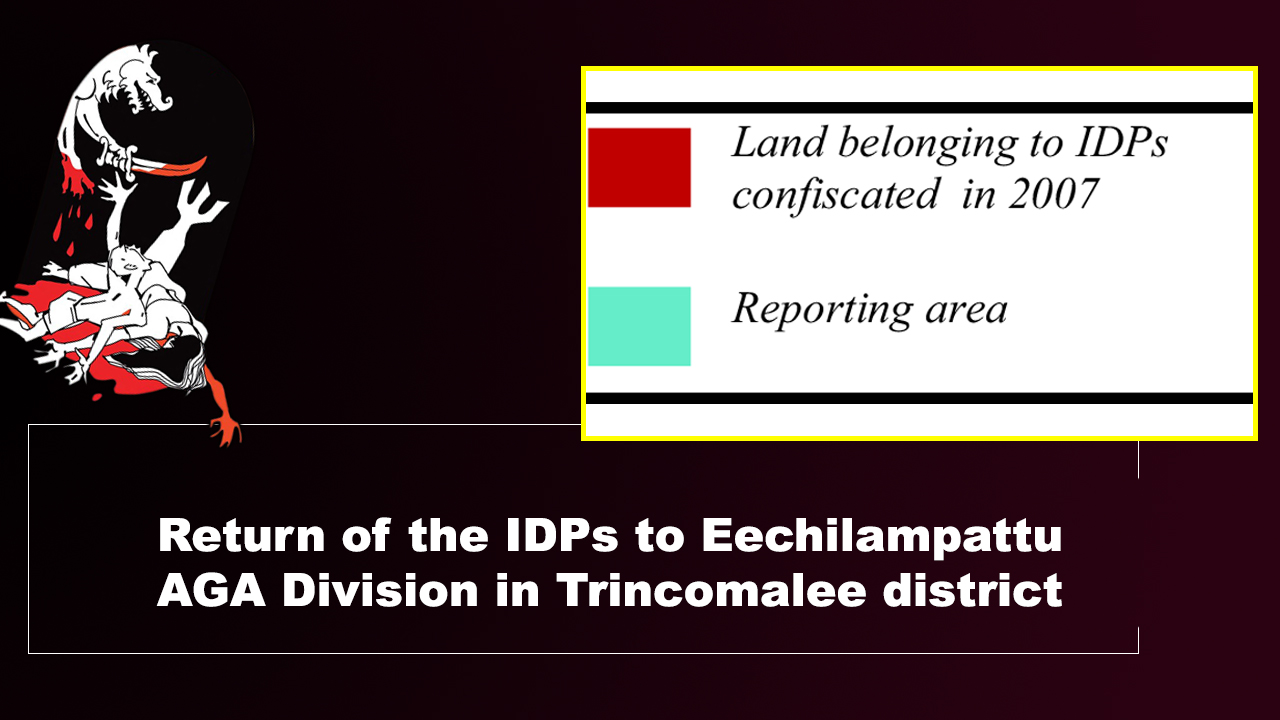 The school half of year 2006 saw the population along the eastern coast of  Trincomalee (see map – both red and green areas) pushed into Batticaloa as the result of Military offensives. Indeed the about the coast further south of the area in the map were also pused down. This report is about the resettlement of the people thus pushed out and we are using the highlighted area in the map for our case study. The situation on will be the same for the people further south who were also pushed out and are now being resettled. 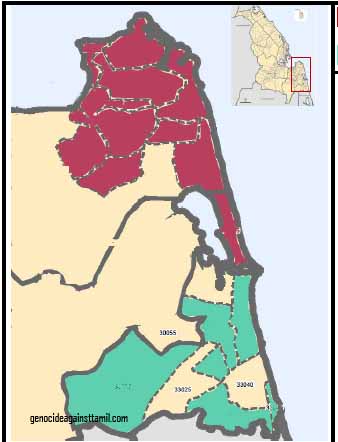 From the mid 2006 until end of 2006, the people from these areas displaced multiple times as they were continuously pushed down all the way into the south of the Baticaloa district. Indeed at some stage the population thus pushed down was trapped in a narrow strip of land caught between the fighting units of the LTTE and the Sri Lankan armed forces. The death and injury toll on these civilians during this period still remains unrecorded due to the chaos of displacement. The resettlement started in early 2007 in the midst of accusations that the IDPs were being forcefully resettled.

The biggest blow came to the people from the eastern part of the Muthur AGA division (red area in the map). Overnight the area was declared as High security Zone (HSZ) thus denying the displace people their own land. According information filed by local mumber of parliament R. sampanthan, a total fo 15600 people were living in this area. Just a few weeks ago, about 300 people from the one GS division, Pallikudiyiruppu, of this area was broght back, however accusations were leveled that they were being settled in very infertile undesirable land.

The people from theEechilampttu AGA division too are slowly returning to their home from the IDP camps in Batticaloa. This report is based on the experiences of the returned IDPs in Eechlampattu (green area in Map)

The people in this area are either farmers or Fishermen. Only a handful of people follow other professions. When these people displaced the fishermen left behind their most valuable possession the boat and the nets. Indeed the fishermen were already affected by the 2004 tsunami and they lost everything a second time when they displaced due to the military offensive. The farmers lost livestock, another major source of Income. Many farmers recounted the size of their herd that they lost when they displaced. On return they also found their homes fully or partly destroyed and their farming equipment also missing.

It is with kind of loss that the resettled IDPs are attempting to restart their livelihood. May of them are frustrated by the impediments they are facing in their afforts. The fishermen are facing restrictions. In some popular places of rich fishing resources there is a total ban on fishing such as the Ilankaithurai and Veruhal Jetty.

The richest farmland belonging to these people are along the Veruhal river at the southern border of this AGA division. The farmers are still barred from cultivating these vast paddy field. People also complained that they are unable to fence their fields to keep away the animals that destroyed the cultivation. The Sri Lankan Army they say cuts fences to make their movement easy with no regard to the farming efforts of the people.

These people take their livestock into the forests for gracing. The also depend on the collection of firewood, honey and other forest products. If the military sees anyone in the forest they shoot without asking questions. Therefore people are unable to also use the forest resources as result of these restrictions people said that they are effectively living on relief provided by the NGOs rather than rebuilding their livelihood.

People also said that they have been ordered not to refer to the Ilankathurai Muhathuvaran a GS division in their area by its name. instead they were told to refer to its as Lankapatnam, a Sinhala name. some of the people said that they were beaten by the Military for using the original name.

Fear is also forcing the people to observe an undeclared curfew after 6.00 pm. This gives an idea of the fear of the military among the resettled people. Indeed, people said that most of the young people of their community did not return to their homes and have instead chosen to go elsewhere, fearing the military.

The military calls for a meeting approximately once a month in their villages. everyone is expected to go for the meeting, even the sick and the mothers with newborn babies. In these meeting the people are warned of not to associate with the LTTE and to inform the military if they learn of any infiltration by the LTTE.