Displacement is harsh on the community and it is made far worse when subjected to imposed shortages of all kinds and blocked out from the view of the outside world. Each sector of the displaced community faces problems that vary form those faced by other sectors. Children suffer malnutrition, health issues specific to displacement, phychological issues and loss of Education. This report attempts to bring out the effect of displacement, on the IDP children in vanni. Following large scale displacement caused by military attacks by the Sri Lankan Government. To this end, the report collates some data that in turn is based on data that have been collated by three sectors working with children. These are the Kilinochchi zonal education section, the preschool board in vanni and the coordinating office of the children’s homes in Vanni.

In a report released in October NESoHR reported on the situation of the health of IDPs based on interviews given by health authorities in Kilinochchi and Mullaithivu Districts. In that report it was noted that the overwhelming concern was the potential for a malaria epidemic due to in adequate IDP shelters and imposed ban on anti malarial spray. Malnutrition was also noted among the very young due to displacement induced poverty and restrictions imposed by Sri Lankan Government on Nutritional supplements such as Thiriposa. A third serious concern was the increasing number of snake bites among IDPs some of which had caused deaths. Again medicines of all kinds were also reported due to weeks and sometimes months of delay in bringing the medicine quota for each quarter of the year. 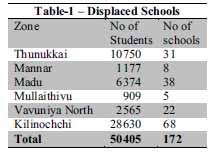 The table –I shows the number schools and the number of students that have displaced recently form the different education zones. Majority of the displaced schools are functioning in the property of other schools due to lack of any other option. This creates enormous problems of shortages of all kinds such as class room space, furniture and toilets. Some schools that are functioning in temporary shelters in other property face problems of poor drainage causing flooding during rainy season,

Principal of Mulankavil MV. School., S. Kanapathipillai commenting on the situation of the displaced schools said, “The decision was made to combine the displaced schools with non-displaced schools. Majority of the displaced schools are presently functioning like this. We combined with three more schools from poonahari, and we pulled the temporary shelters put up for us by the INGO, Save the children, in Mukompan and set it up in the cannon complex in Tharamapuram. We expected about 200 children to attend this setup but presently 827 children are learing in this setup. Our biggest problem is the lack of toilet facility. Our students are traveling long distance to attend the school. Children are therefore suffering due to lack of toilet facility. We are trying hard to fix this problem. We have no resources to quickly fix the problem. We have no help from INGOs either. The problem is made worse because of the rainy seasons. We hope someone will come forward to assist us.” 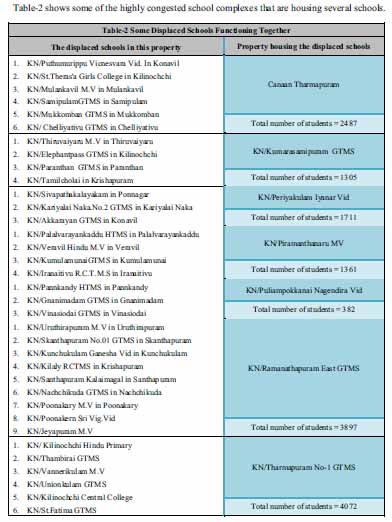 The preschoolers attending the preschools were also given nutritional food at mid-morning and were regularly checked by community nurses. Displacement has disrupted this and the preschool board is reporting a noticeable increase of malnutrition among this group.

Children’s homes have increased in numbers in the tamil homeland as the war has continued over the decades. Children’s homes cares for children who have lost one or both parents as well as children whose families face extreme poverty. The table-4 above shows the 15 children’s homes that were caring for more than 1600 children that have displaced recently and the facilities they have lost as a result. The table was based on a survey among the 15 displaced childrens homes. Most children homes reported that they have sent the majority of the children to relatives due to lack of facilities following displacement. Most of these children who were sent torelatives are not attending school and are keep to rejoin their childrens’s Home to continue their education. In order care for the children who could not be sent to relatives and to take back the children sent to the relatives most childrens Homes appealing for assistance to build living spaces, toilets, and drinking water 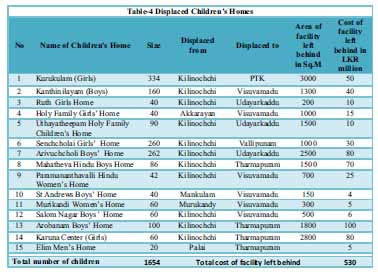 Dropping out of school

Many students report a lack of interest in continuing education after multiple displacement , strangeness and extreme congestion at the new displaced school in order earn a little bit of money to feed their siblings and parents who have lost their livelihood. In the market in Tharamapuram which has a large concentration of IDPs many children can be seen vending fruits and vegetables at school time.

One year -10 student, Guneswaranathan, studying at the combined school for poonahari zone expressed the common feeling of the students, “I am originally from mannar we are a farming family and Mannar we were farming 22 acres rice fields and further 5 acres of vegetable plots. We should all help at the farms after school. This is the forth school I am attending in one year each time changing school as we displace. At this school I do not know any of the teacher and they also do not know my name. this makes me very sad. I have no interest in schooling anymore. My parents wish us to continue with education and that is why iam coming to school.”

Year -11 student,Thiruchelvi, studying at the same school expressed similar sentiments, “iam from Velanai an islet off Jaffna we displaced to Mukompan in Poonahar in August 2006 after a large scale massacre in the islets off Jaffna . I lost my father when I was very young and our mother is caring for us I must sit the GCE-OL test this year but I am un interested in studying. We are staying with relatives in Thevipuram. I did not want to go to the school nearby because everything is new there. We have to travel 15 kilometers to this school just so that we can continue to learn form the same teachers. Through there are very few facilities in this school we come here because we known the students and teachers here.”

During October a workshop was held in Kilinochchi to work out a scheme for helping the children as well as school teacher who are suffering from psychological pressures caused by displacement and the ensuing loss. The stated aim of the workshop was to uplift the psychological well being of the teachers so that they in turn can help the students who are also facing psychological pressure of IDP life exhibited as disruptive behaviours and inability to care for their own well being through proper eating, cleanliness and concentration. Fears were expressed that these tendencies if ignored will lead to serious mental illness. There was concern at all the workshop that the parents who themselves are under pressure of displacement are unable to observe the changes in the behavior of their children and even if they do are in no position to take the right action.

Stresses identified at IDP camps are ; unfamiliar location; congestion in the IDP camps restricting free movement ; lack of washing and toilet facilities; inadequate food; problems in caring for those who fall ill; restrictions of free movement ; lack of livelihood; inadequate protection in rain; fear of bites by poisonous insects and snakes ; fear of aerial attacks and having to live without bunkers; and security for own property in IDP camps.

A similar list was drawn for issues faced at schools; displacement prevented the completion of syllabus; no classrooms; no furniture; large classes leading to problems in learning; charges in school times to accommodate two sessions; feeling lonely; transport problems; no library or playground; no drinking water; no space to do homework; and classes are not held regularly students of all ages say that they long for what they have left behind such as relatives, friends, pets, palnts  and even small objects.

The monetary cost of displacement to preschools and childrens homes were already noted above as LKR 156 million and LKR 530 million respectively. NESoHR sent a survey form to all the schools in Vanni requesting data on the effect of the war and displacement on the school. Thirty school all form the Kilinochchi Education zone responded and that is presented in Table-5 below.

According to this survey these 30 schools have faced a monetary loss of LKR 300 million. As already noted  172 schools displaced recently. Based on the survey returns of 30 schools, the monetary cost of displacement for all the 172 schools can be estimated to be at least six times that of the 30 school. This figure is LKR 1800 million.

Thus the loss to just these three sectors that deal with child welfare exceeds LKR 2.5 million

The table in addition to the monetary loss shows the number of times a particular school had displaced and the instances when shrapnel form either aerial bombing or artillery shelling fell inside the school complex disrupting the school day. Of the 30  schools that responded to the survey 19 schools have faced either shelling or bombing attacks which is almost 2/3 of the schools surveyed. 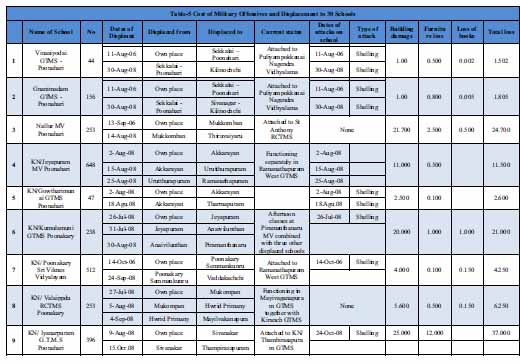 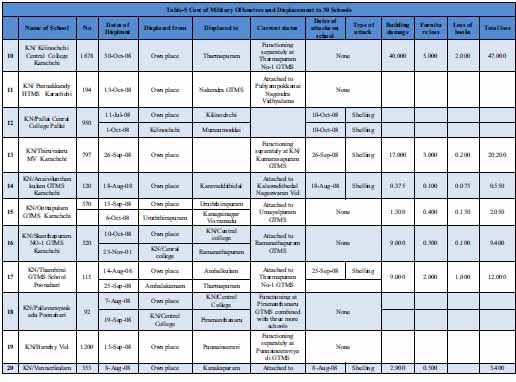 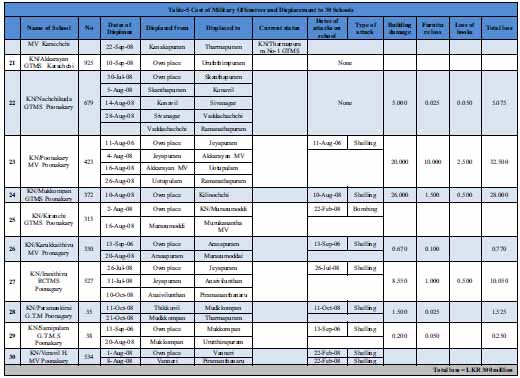 Extrajudicial executions since 2002 and the Justice system in the island.!

North East Secretariat On Human Rights Report on the Nelliady Massacre of May 4, 2006.!