North East Secretariat on Human Rights (NESoHR) wishes to associate itself with the hundreds of thousands of Tamils all over the world who are mourning the untimely demise of their beloved
friend and legislator K.Sivanesan. Returning home after attending parliamentary sessions in Colombo Siva fell victim to the claymore mine set on the A‐9 highway by the deep penetration
unit of the Sri Lankan Army yesterday 6 February 2008 along with his driver Periyannan Maheswararajah.

Siva was an ardent patron of NESoHR and made use of his parliamentary capacity in the floor of the house of parliament and outside to voice the human rights violations Tamil people face. It is ironical that our monthly report for February 2008 released just one day before this killing had the following paragraph on the status of Tamil parliamentary representation and the killing in succession of Tamil parliamentarians:

(Quote)
“Tamil parliamentary representation not of any use” “In the Sri Lankan democratic dispensation since 1948, Tamil parliamentary representation has always been a de‐valued affair. A Tamil vote is not equal to the Sinhala vote. Sinhala voters can bring about desired changes, but not so with the Tamil voter. Moderate parliamentary means to ask for the right share is unthinkable for the Tamil people. History of racial politics since the race riots against Tamils in 1958 has ample evidence of Tamil attempts to resolve the conflict through negotiated political means getting aborted due to Colombo’s insincerity and deceit. The Tamil constituency has seen its elected representatives gunned
down one after the other by design. Tamil legislators are denied legitimacy and the special privileges due to them as peoples’ representatives have now become defunct. They are treated as non‐entities in public by the state armed forces. Provision of security to Tamil parliamentarians has been subject to such nasty
levels that many parliamentarians have to seek the intervention of the Supreme Court.”

NESoHR strongly condemns this killing and wishes to recall similar systematically planned killings of Tamil peoples’ elected representatives one after the other. Mr.Sivanesan’s killing is the latest in the series commencing from Batticaloa legislator Joseph Pararajasingham who was killed inside the cathedral while attending Christmas mass. Following this were the killings of Jaffna District Legislator Nadarajah Raviraj, Tamil Member of Parliament for Colombo Thiyagarajah Maheswaran. Mr.Arianayagam Chandra Nehru, Former Batticaloa District Legislator and a Human Rights activist and Mr.V.Vigneswaran President of the Trincomalee District Tamil Peoples’ Forum who was announced as the Tamil National List legislator for Trincomalee were also gunned down in this manner. All these
people were strong advocates of Tamil peoples’ human rights and became targets of the state forces and those elements working with them in silencing Tamil dissent.

It is time now that the civilized world see the pattern of killings and cry halt to this crime against a people who are victims of a cruel war for over three decades. 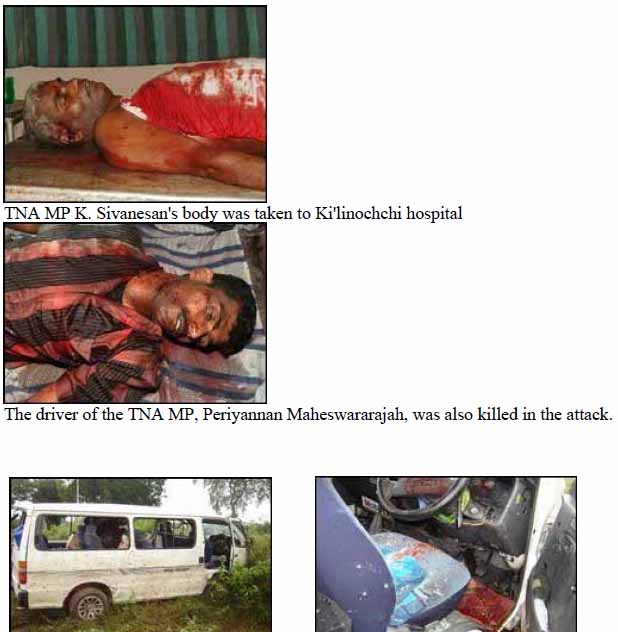