January 22, 2019 by admin in International Reports 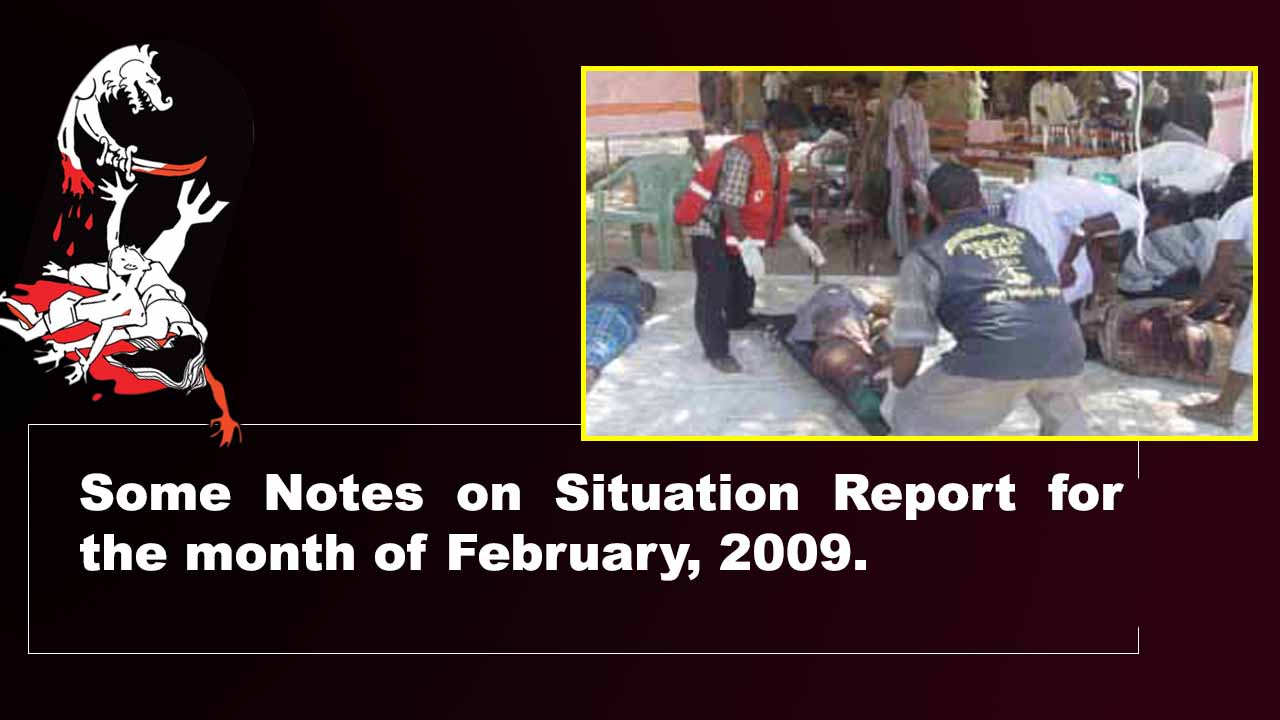 Some Notes on Situation Report for the month of February, 2009.

1. Structured Humanitarian Work: After the population of over 300,000 have moved into villages such as Puthu Mathalan, Pokkanai, Valaiyarmadam and Mullivaikal in Mullaitivu district the health services divided these villages into six zones. TRO too went
along with this delineation of boundaries and hick started its activities.

2. Provision of rice gruel: Famine is spreading fast with the non arrival of enough food items from the South by WFP. For a month to feed the IDP population the need is 695 lorry loads – 6950 Metric Ton. 5100 MT Basic food items such as rice, flour, dhal and vegetable oil. These basic items should be brought by WFP and to be distributed as dry rations to IDPs. Supplementary food items – other items needed for cooking amount to 1850 MT. Totally 6950 MT. The need for a day in Vanni is 170 MT – 17 lorry loads. For the month of February the amount of food items came to Vanni so far is 50 MT – 5 lorry loads. This is not enough even for one day’s distribution. TRO has organized to open 6 gruel (Kanji) distribution centres in six zones which would give solace to the starving people. TRO is planning to open six more as the demand is
ever increasing – altogether 12 centres for kanji distribution with provision of milk (using milk powder packets) to infants.
With the participation of other cooperative societies and administrative service 18 more centres – 3 for each of 6 centres will function for the same purpose of providing kanji to all and milk to infants.

3. TRO has started constructing 60 wells – 10 in each zone along the coastline. They are called ‘Kottu – Palmyra tree trunk wells’ – by digging sandy soil and induct 2 or 3 plastic barrels (if Palmyra tree trunk is not available) into it. Already 40 wells have been built. TRO has come forward to build 300 more wells – additional 50 wells for each of 6 zones. This should be completed before 8th of March 2009. TRO has promised in the coordinating meeting to build 30 toilets – 5 in each of 6 zones. These toilets will be built on the other side of the road leading to shrubby forest lands. With the participation of Fishemen’s Cooperative Federations additional 1000 toilets will be built in a short period of on coastline.

4. TRO will remove the dead bodies not claimed by relatives to bury them. TRO is preparing the list of persons killed by for example shell and aerial attacks and famine in war related incidents. Their deaths will be confirmed by applications made by close relatives attached with affidavits and certificates issued by Justice of Peace and Inquirer into Sudden Deaths. Close relatives of dead persons will get Rs. 3,000 to be paid by TRO. 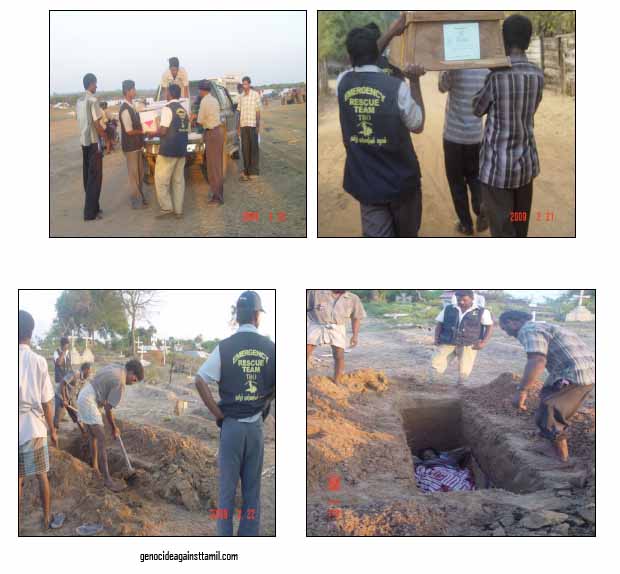 5. In health and hygiene matters TRO will cooperate with Health Services.
1. In the construction of temporary toilets – pit or water seal.
2. Water management
3. Awareness creation about health habits
4. Channeling bad water around the wells to a distance.
5. Chlorination of wells to be used for drinking purposes.
6. Elimination of flies which spread diseases such as diarrhea.
7. Usage of mamoties for toileting.

6. Bridge of relationship: Tracing and rejoining the missing persons – by getting information and announcing through Radio or loud speakers.

7. TRO’s Hospital Work
a. Helping the patients: Mostly wounded patients are being brought to the hospitals. TRO volunteers are there round the clock. TRO volunteers lift the wounded people from the vehicles, put them on stretches and carefully lie them down on mats and carpets for immediate check up and treatment. In many cases the wounded are immediately taken surgical room. The volunteers complained about the shortages of mats, bed sheets, pillows and stretches for the work to be done without delay and smoothly without giving pain to the wounded. 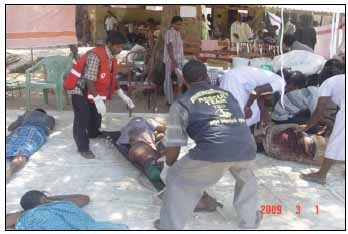 c. TRO organizes morning, midday and night meals everyday to the patients warded in the hospital. TRO prepares meals outside the hospital by employing volunteers, take the cooked food by its vehicles and provide to the each patient.

d. Taking patients to the ship: TRO: TRO provides transport for the patients to be taken to ship from the hospital upto to the beach. TRO volunteers lift most of the patients on stretches and mats, put them in the vehicle and drives them to the ship to taken to to
Trincomalee. With quick plying of vehicles about 300 to 400 patients with almost same number of helpers are transported 2 or 3 times in a week. This eases the transport problem to the hospital authorities.