Kumarapuram is a village about seven kilometers form the Kilinochchi town center,the village came under the Sri Lanka military aerial bombing at a location about 600 meters from the A9 poonahari road junction (see map) on 10 October 2008. The bombing killed a female school teacher, her 10 year son old daughter and another woman and injured the teachers husband, their son and five more civilians. The bombing is part of a long series of aerial bombardment of the vanni area, and particularly in recent times the surroundings of the densely populated Kolinochchi town, the extensive bombing and shellings of Kilinochchi town surroundings has caused massive exodus of people form this area, swelling the already large IDP population of vanni. See also NESoHR report on kilinochchi city bombing.

What the injured husband of the teacher said of the incident:

“ I am a local government employee of the Pachilaipalli AGA Division . we have three children. We displaced form our own home in Pachilaipalli in August 2006. We built a mud house in Kumarapuram in Kilinochchi and were living there since 2006. On the fatal day at 6.25 am, my wife and I were cooking for the day prior to leaving for work. We heard the noise of the bombers. We took our three children and to the bunker. Three bombs fell around my home. One fell very close to our bunker. My wife died on the spot. My daughter was unconscious and died later in the hospital. My son and I received injuries and we both found it difficult to breathe immediately after the explosions. My hearing has also been affected by the noise and the shock. We have displaced again and are living with relatives. We held the funeral of my wife and daughter from this relative’s House”

The injuries sustained by people in these ling series of aerial bombardment have created many suspicions about the makeup fo the bombs among the medical staff treating the injuries.

In one aerial bombardment for the first time the medical staff noticed several burn injuries on some of the victims. Since there was no fire at the bomb site people suspect that some burning agent is being used in some of the bombs.

Two of the Kumarapuram bombing victims, the teacher and her daughter died with no external injuries. The husband and the son the teacher say that a bomb exploded very near the bunker where they had taken refuge and they had difficulty breathing soon after that explosion. Indeed the victims in some other bombing incidents also died with no external injuries. Medical opinion is that this could be caused by one of two causes. One is that the victims died of extreme shock waves created by the explosion. The other is that the bombs had some chemical agent that destroyed the oxygen in the surrounding area thus suffocating the victims. The experience of the teacher’s Husband and son suggest the second causes as the reason for the death of the teacher and her daughter.

The prevailing situation in vanni and extreme shortage of medical staff prevents any further investigation in to the cause of these unexplained injuries and causes of death among the victims. 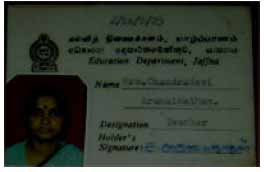 Other killed and injured