On 29 January and 30 January 2006, ten Tamils Rehabilitation Organisation (TRO) employees were abducted in two separate incidents in the same area. Three of the ten abducted were later released and seven TRO employees still remain missing. Details of
those abducted and NESOHR’s experience of a similar abduction is described later in this report.

SLHRC: The two staff of the TRO run preschools, who were abducted and later released, were interviewed by the Sri Lanka Human Rights Commission (SLHRC) on February 8 and 9.

SLMM received complaints about their abductions.

ICRC received complaints about their abductions

NESOHR: In spite of all of the above actions, complaints and appeals, the families have no idea what has happened to their family members. NESOHR appeals to the international community to find the answers that the families of the abducted are still
seeking after two and a half months.

The missing TRO employees from left to right:

1. Kasinathar Ganeshalingam (53) is married with two children. He is the Coordinator of Pre School Education Development Centre (PSEDC). He was developing the preschool education for the children of Sinhala, Muslim and Tamil communities in the Northeast. His efforts for enhancing preschool education are well known.

2. Kailayappillai Ravinthiran (26) is a TRO Accountant of Vipulananda Children’s Home in Palugamam, Batticaloa that cares for 70 boys who were affected by war.

3. Thambirasa Vasantharaja (23) abducted is an Accountant in the Batticaloa TRO office

4. Thanuskody Premini (26) is the TRO Chief Accountant, Batticaloa office. Premini is one of four children of a family that struggled financially. Her father has been suffering from a chronic illness. She is also in her final year in receiving a Bachelor of Arts degree at Eastern University. TRO staff members said Premini has shown
exemplary work as a staff member as well as a student.

5. Shanmugunathan Sujendran (21) is a TRO Accountant for the Manikavasakar Illam Children’s Home in Santiveli, Batticaloa, which cares for 42 boys who were affected by war.

6. Arulthevarasa Satheskaran (22) is a TRO accounts trainee in the Batticaloa office.

7. Kathirkamar Thangarasa (43) is married with four children. He is a Driver for the Kilinochchi office. Before joining TRO, Thangarasa was a paddy field farmer and often took another job as a labourer in order to provide enough for his family.

Background of region of abductions
Both abductions took place on A11 Road very near the Welikande checkpoint of the Sri Lankan Army (SLA), which is in the Polonnaruwa district of Batticaloa.

In March 2006, Sri Lanka Monitoring Mission (SLMM) officials visited the “Karuna” faction members at a “camp” in Thivuchchenai which is not very far from the Welikande SLA checkpoint.

Another abduction case similar to the abduction of TRO employees was investigated by NESOHR in September 2005. This family was later released from the Thivuchchenai “Karuna” camp by the ICRC. Statements made by this family about their experience will throw further light on the abduction of the TRO employees. This family was abducted when they were traveling from Batticaloa towards north. They have just cleared the Sri
Lankan military checkpoint in Welikande when the abduction took place. The camp in which they were kept and later released with ICRC assistance was identified by the family as belonging to “Kauna” faction.

The similarities between the abduction of this family and the TRO employees are striking. 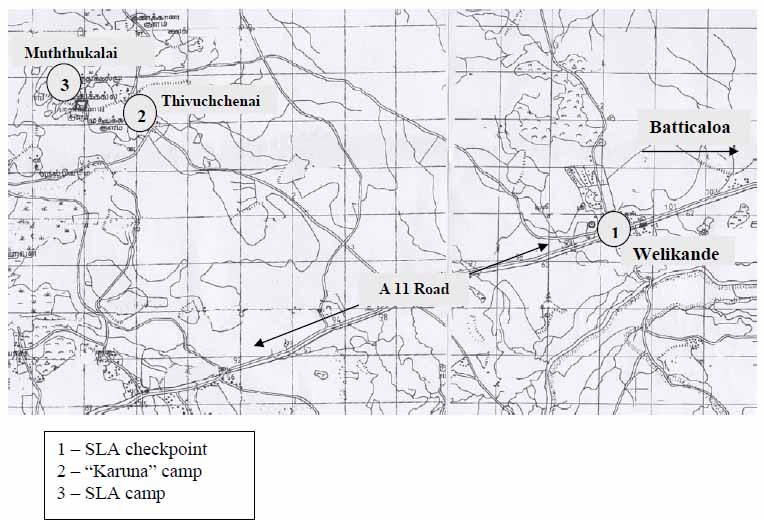 “At about 5:30 pm (Sunday, 29 January 2006) we (the two preschool teachers and one coordinator from Mamunai North) joined Mr. K Ganeshalingam at Kallady (Batticaloa District). While we were moving on the Batticaloa road police stopped our vehicle and checked us. They asked us, in a threatening manner, whether we were carrying bombs and then allowed us to proceed. We
met Ms. Kalaivani, PSEDC Zonal Coordinator (Kalkuda) at Valaichenai and after meeting we left her in Valaichenai and proceeded towards Welikande. We saw a white Hi-Ace vehicle following our vehicle. The front lights of this vehicle shed some light into our vehicle. When I looked at my watch it was 8
o’clock. We were subjected to checks at the Welikande checkpoint. At the time we saw the white van parked behind our vehicle. When we moved a short distance from the checkpoint the white van came behind us, overtook our vehicle and stopped us. Some men got down from the white van assaulted Mr. Ganeshalingam and the driver tied them up and dumped them in the back of the vehicle. Then they drove the vehicle into the jungle area. After a long drive the vehicle stopped at 11:30 pm (Sunday, 29 January 2006). A girl there made a body check on us. We were there the whole night. We were separated and we didn’t see Mr. Ganeshalingam and the driver all night. The next morning the PSEDC Divisional Coordinator Ms. Dosini was separated from
us. That day night at 9:00 pm (Monday, 30 January 2006) they brought us to the main road put us in a bus and sent us with a warning not to tell this incident to anyone.”

A statement made by one of the TRO staff members who was in a van from which some of the TRO employees were abducted.

“A TRO vehicle was carrying fourteen TRO accounts staff plus the driver from Batticaloa to Vavuniya. We left around 2:00 pm on 30 January 2006. After making entries at Welikande military check point, we proceeded another 100m further. A white van that was parked a few meters away from the checkpoint started to follow
and waylaid the TRO vehicle. Five men, aged between 20 and 25, got from the white van and entered into the vehicle. One of them dragged the driver out and dumped him into the back seat, and started driving into the nearby surrounding jungle area.
All the captives were blindfolded and had their hands tied by the men inside the vehicle. They stopped the vehicle inside the jungle area and made all the men sit under a tamarind tree. They gave back the salwar scarfs which were used to blindfold to the girls. All the girls, except Miss Premini, were put back into the vehicle with the driver, and brought back to the main road. Miss Premini and the four male staff were kept behind. When we came to the main road one of the abductors shouted that there was a police jeep on ahead, to which another replied that it was not a problem for them. The abductors also suggested that the released persons should make arrangements for the last rites for the 5 people in their possession. They were armed with pistols. While there were five men directly involved in the abduction and the interrogation, there were an unknown number in the white van.”

Report on the Deliberate Abduction and Murder of M.Sathananthan.!