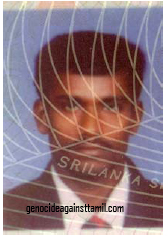 Baskaran grew up in Kudaththanai with his adopted family and attended the Kudaththanai American Mission Tamil Mixed School. He left school after studying GCE OL classes. Hebegan to work as a fisherman to earn a living. As his adopted siblings displaced from the is land during the war, Baskaran took over the full responsibility of taking care of his aging parents. Baskaran married six years ago and they have two young children. His family continued to live in Kudaththanai so that Baskaran can take care of his aging parents. Baskaran has recently obtained a passport with the intention of traveling overseas to escape the threats he faced in his village. The above photo is from his passport.

Past arrests and torture

According to his friends and relatives, Baskaran was arrested twice by the Sri Lankanmilitary, under the Prevention of Terrorism Act (PTA). His first arrest was in 1997. He was kept in the Kaluththurai prison for around six months. He was tortured during this period. He was hung upside down and beaten. A bag filled with petrol fumes was tied over his head. He was produced in the courts and released after the courts found him innocent. He was arrested again in 1999 and was again released by the courts a few months later after he was found innocent. He married soon after his second release.

Recent harassment and the move by the family

Few months prior to his shooting, Baskaran’s family and his parents moved to Katkovalam, unable to bear the harassment by the Sri Lankan military and the local paramilitaries in Kudaththanai. The two villages are separated by a distance of about 6 km. 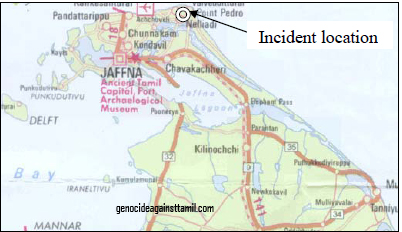 Sri Lankan Army (SLA) rounded up Baskaran’s home in Kudaththanai on January 5th, the day before the shooting. They held him for questioning for a long time. SLA searched the house premises, including the belongings of Baskaran’s children, for a long time. They were there from 5.30 until 8.30 pm. SLA accused Baskaran of belonging to LTTE and of possessing Claymore mines. Baskaran told them that he does not get involved in any thinglike that. He begged the SLA to inquire from the  neighbours. When the SLA finally left they warned that the family that they must report any visit by the LTTE to their home. Baskaran was unable to go fishing in Katkovalam because he had the “pass” (Sri Lankan Navy permission) to fish only in Kudaththanai and not in Katkovalam. He had there fore started to go to work as a builder in Katkovalam. His wife had advised him to go to Vanni because of the threats and harassment by the SLA. Baskaran had refused to leave his aging parents because there was no one else to take care of them. That night, however, the family went to bed considering more seriously about a shift to Vanni.

Around 11.00 pm someone called out “Baskar”. Thinking it was his friends next door Baskaran opened the door. The men standing at the door tried to pull Baskaran by his teeshirt. Baskaran was holding on to the door and begged them to let him go because he has young children. When his wife screamed they pointed the gun at her and she stopped screaming. Baskaran’s wife grabbed his tee-shirt and tried to pull him back into the house. Baskaran pushed his wife away fearing that the invaders will harm her. The invaders then asked what Baskaran wanted as a last request. He said that he wanted to see his children. His wife turned to go inside to collect the children and she heard the gunshots. Baskaran was lying on the ground and was in pain. His wife was afraid to go near him. Baskaran’s  neighbours who attempted to come to the aid of the family after hearing his wife’s screams discovered that armed SLA were guarding their doors preventing them from leaving their homes. The invaders left after warning his wife that they will come back the

next day to search the house again. After the invaders and the SLA in the surroundings had Incident location left, neighbours tried to hire a vehicle to take Baskaran to the hospital. None of the drivers were willing to take Baskaran to the hospital out of fear of retribution by the SLA. Baskaran died of the gunshot wounds soon after. One of  Baskaran’s friends came and looked closely at the dead body of Baskaran. Immediately the news had traveled to the SLA, who arrived demanding the identity of the person who came to look at Baskaran’s body. That person has gone into hiding.

Next morning the same men who shot Baskaran came and looked around. When the magistrate came for the inquiry no one was willing to tell the magistrate the truth. Out of fear, Baskaran’s wife told the magistrate that she did not see anything except the dead body of Baskaran. Very few people came to the funeral out of fear. SLA threatened Baskaran’s father for informing the local government official (GS) about the incident.

Friends and relatives say that they can identify one SLA officer by the name Jegath who was stationed in Kudaththanai for several years. He was also present during the shooting in Katkovalam at Baskaran’s house. He may have now been transferred to another area. Some of them also said that Jegath may have been transferred to the Muhamalai checkpoint which is the border point between the SLA controlled and LTTE administered areas through which everyone moving between the two areas must pass through.

Two men from their area, Kamalakannan and Kuhan were arrested. Their family was able to see the two men after the arrest. Villagers said that these two men have now been sent to the Kaluththurai prison in Colombo .Villagers also said that out of about 500 families that lived in their area only about 25 are still staying there.

NESOHR is with holding the identities of the people who have provided us with information about the case for their own safety. NESOHR is ready to share more detailed information with any reputable international human rights organizations wishing to inquire into this case.

International diplomats, media personnel and INGO staff in the island have asked us why we have not issued reports on the attacks on the Sri Lankan military. We are surprised by this question. NESOHR is styled as a national human rights organization and its main task is to protect the human rights of those who are unarmed. For this reason we do not bring under our purview the attacks on armed persons like the Sri Lankan military, members of the LTTE and members of other armed groups.

North East Secretariat On Human Rights Report on the Nelliady Massacre of May 4, 2006.!