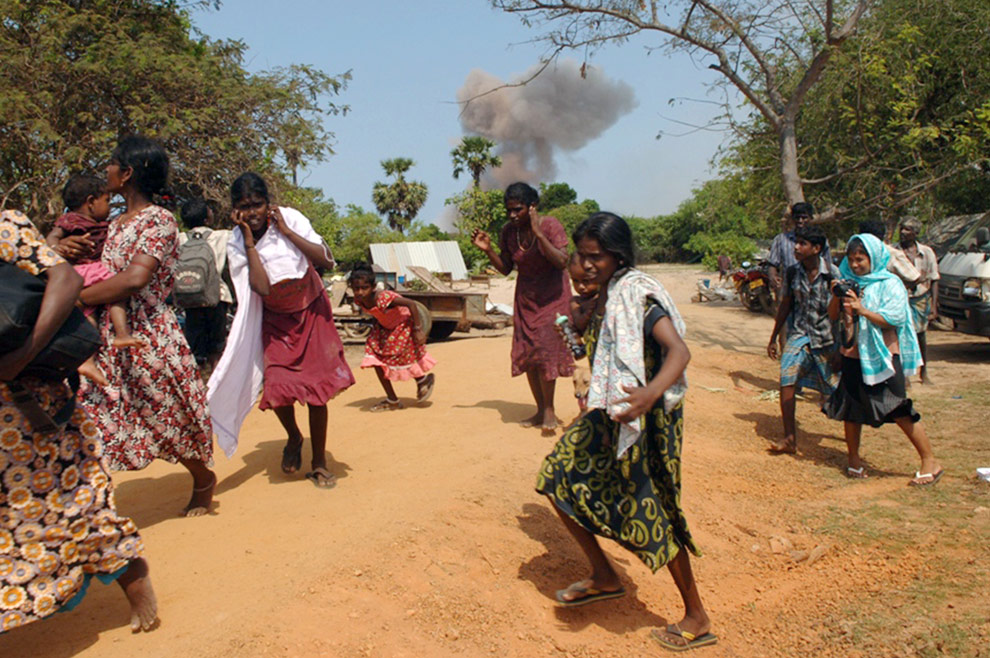 RE: Investigation of U.S. citizen and U.S. green card holder for genocide, war crimes, and torture against Tamils in Sri Lanka

I represent Tamils Against Genocide (TAG), a non-profit organization dedicated to promoting the enforcement against a United States citizen and a United States green card holder of the Genocide Accountability Act of 2007 (GAA), the War Crimes Act, and prohibition of torture. The U.S. citizen and U.S. green card
holder are Gotabaya Rajapaksa, Sri Lanka’s Defense Secretary, and Sarath Fonseka, Sri Lanka’s Army Commander, respectively. I strongly urge the Department to open a grand jury investigation into these crimes based on the enclosed three-volume, 1,000 page proposed indictment that I have prepared. I would submit that the evidence of genocide, war crimes, and torture amassed in the
three volumes amply satisfies the Department’s threshold for commencing a criminal investigation.

The following points, among others, demonstrate the urgency of investigating the alleged crimes:

1. The model indictment charges Gotabaya Rajapaksa and Sarath
Fonseka with 12 (twelve) counts of genocide under the GAA. That
legislation was spearheaded by Senator Richard Durbin (D. Illinois). It was supported by President Barack Obama, Vice President Joe Biden, and Secretary of State Hillary Clinton. The GAA is codified at 18 U.S.C. 1091. The maximum punishment is death. Both proposed
defendants are charged with command responsibility for genocidal acts perpetrated by their subordinates in the Sri Lankan security forces.

2. The GAA applies to genocide irrespective of the place of its occurrence and irrespective of whether the accused is a U.S. national. The model indictment, nevertheless, singles out Gotabaya Rajapaksa and General Fonseka as defendants because the former is a U.S. citizen and the latter is a green card holder. These facts strengthen the political justification for the genocide investigation because the United States has been vocal with Serbia, Bosnia and other nations about policing and punishing their own citizens or residents for genocide. The model
indictment is not asking the United States to be the genocide
policeman of the world.

3. Under the GAA, genocide is defined as an attempt to physically
destroy a group in whole or in substantial part because of race,
religion, ethnicity, or nationality, as such, by employing the following tactics: extrajudicial killings or disappearances; the infliction of serious bodily harm; or, the creation of conditions of life intended to cause the physical destruction of a racial, religious, ethnical, or national group in whole or in substantial part, for example, by starvation, denial of medical care, and encouraging disease by denial of medicines.

4. The model indictment charges Rajapaksa and Fonseka with genocide of Tamils in twelve discrete geographic areas. The time frame is from December 6, 2005, when both assumed their government positions, to the present. The indictment chronicles more than 3,750 extrajudicial killings, approximately 30,000 Tamils suffering serious bodily injury, and more than 1.3 million displacements (a number far exceeding displacements in Kosovo which lead to genocide counts before the International Tribunal for the former Yugoslavia).

5. Count twelve of genocide is indistinguishable from the genocide of 7,000 Bosnian Muslim males in Srebrenica, which had been declared a safe zone by Bosnian Serbs. Count twelve charges Rajapaksa and Fonseka of bombing and shelling 350,000 Tamil civilians into one large “safe area,” and, since January 21, 2009, killing and maiming the Tamils who had amassed there by aerial bombing and artillery. In the month of January, according to the model indictment, 750 Tamils have been massacred and more than 2,250 have been seriously injured. On the BBC, on Feb. 2, Rajapaksa declared that nothing should live or breathe outside the Orwellian “safe area.” Thus, one hospital outside
the area has been bombed three times, including by cluster bombs. More than 1,000 Tamils are in detention camps, and reports of rape have already emerged.

6. Other exemplary genocidal events charged in the indictment include the Sinhalese Buddhist slaughter of five Tamil students and seventeen Action Against Hunger aid workers in 2006; mass graves; and, Tamil disappearances into white vans without license plates every five hours.

7. Every member of the Sri Lankan security forces is Sinhalese. There are no Tamils. No member of the security forces since Rajapaksa and Fonseka assumed their respective positions has ever been prosecuted or punished for atrocities against Tamils, including torture or murder. Indeed, in more than 60 years, only one prosecution has been pursued for rape, murder, torture, or other crimes against Tamils, and that one isolated exception was for peculiar reasons.

8. The model indictment relies on evidence obtained from affidavits, court documents, and contemporaneous eye-witness reporting from media sources, for example, the BBC.

9. If Rajapaksa and Fonseka are indicted, Sri Lanka would be obligated to extradite them to the United States under the Genocide Convention of 1948 and implementing legislation.
I am eager to meet with you or your staff to discuss the three-volume enclosure at your earliest convenience.

Memorandum on the Protection of Tamil Civilians in NE Sri Lanka.!