Food for the vanni people

This report based entirely on data provided by the Kilinochchi and Mullaithivu District secretariats is intended to show the amount of essential food items that have entered vanni by convoys in the months of October and November 2008. It collates the quantities of food items that were sent by the commissioner General of Essential Services (CGES) and world food program as relief for the IDPS and the quantities brought in by the multipurpose Co-operative societies for sale through its shops. This therefore includes all the channels by which food is brought into vanni at present.

Vanni was not only self sufficient in rice production, it also exported it. The displacement of half the population of Vanni is mostly form regions of food production such as vavuniya North Mannar,  Odusuddan, and Poonahar. The restriction on food items coming into vanni must also be judged in the backdrop of this loss of local rice production caused by displacement.

The last NESoHR report on this subject dated 12 september 2008, released on the eve of the eviction of UN agencies and other INGOs form vanni by the Sri Lankan Government, summarized quantities of some essential food items brought into vanni as relief for the IDPs form January 2008 until August 2008. Those figures and the shortfalls are summarized in the table below.

Since the eviction of the UN and other international agencies, relief food items for the IDPs were brought in very large convoys receiving much media attention . UN agencies have also claimed that sufficient food is reaching the IDPs. The October to November data presented below will show the reality of the availability of food in Vanni.

As already stated, food is brought into Vanni through three separate channels, namely Commissioner General Essential Services, world food program, and Multipurpose co-operative societies. The quantities of food brought through these three channels for the two months for the two districts and the shortfall of food items for the entire population calculated based on the standard WFP allocation are shown in the tables below. 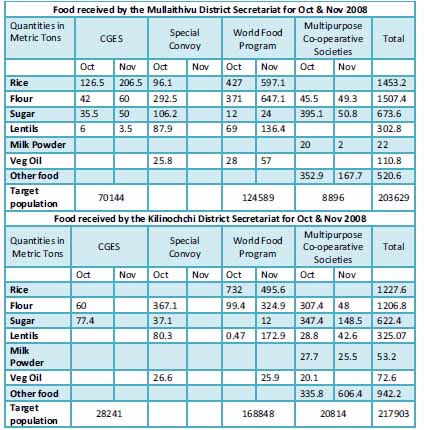 Food distributed to IDPs in November 2008

The end result of the losses of cultivation and restrictions imposed by the Sri Lankan Government on food entering vanni is the reduced amount of food distribution to the large IDP population in vanni. The following are the official figures of the Mullaithivu and Kilinochchi District secretariats on the amount of food distributed during the four weeks of the months of November to the IDPs who are receiving the WFP relief. The quantities are indicated as the number of days calculated based on WFP allocation for which the quantities supplied is adequate.

Government Agents ordered not Request Assistance from UN and INGO’s 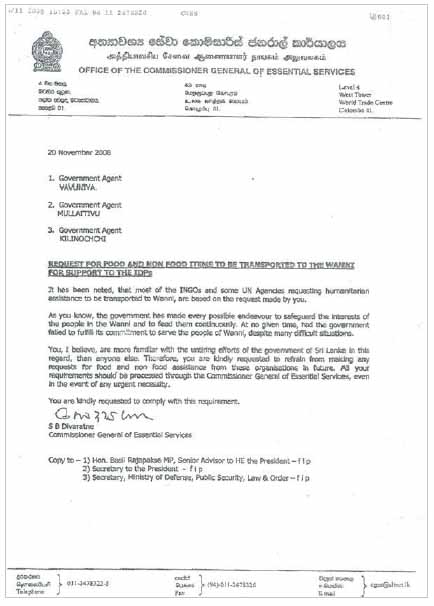 In the backdrop of the food restrictions described above this order is clear evidence of using food as weapon and it is serious crime.